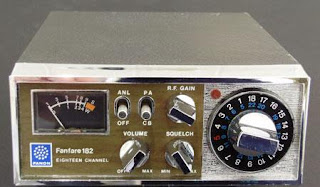 During the height of cb popularity in the late 70's, I bought my first genuine cb radio. I had a Realistic 2 watt 3 channel walkie talkie, but in 1978 at 14 years of age I became a bona fide AM good budgie. I had been saving my paper round and pamphlet delivery money, and headed to Just CB in Mitcham (suburb of Melbourne) to purchase my first set up. The choice of cheap AM sets was endless in those days, and could be bought almost anywhere, but I decided on a cb shop to spend my money at. The Old Man was with me and he was talking to the salesman when a radio caught my eye. It was a Fanon Fanfare 182 with 18 channels on the dial, and the American channel equivalent on the inside of the Australian 18. What impressed me was the large meter, which the others didn't have, and a variable rf gain, again this feature was not on the other cheap radios. A quick run down from the salesman and I bought it, along with an Arlec power supply, coax and half wave Ringo antenna. I was a few dollars short, and my Dad put in the rest. My Dad also paid for a length of pipe and eave bracket from the local hardware to mount the antenna, and the pipe was delivered the following day.
After setting up the antenna and running the coax through the roof, with my Dad's help, I keyed up for the first time. My neighbor who lived behind us, and was a SSB cb'er, came down to AM to see where this new splatter was coming from. He soon arrived at my front door with a SWR meter and patch lead to tune the Ringo, and I was very happy for his help. Didn't help the splatter, but we both were affected the same, and had to live with it. Before long two more of my school mates had bought cb set ups that lived very close and the splatter was terrible. My poor neighbor who helped me ended up mounting his cb in his car, and was a little annoyed at us AM good budgies, but that was life on the crowded band.
They were great days and great memories. I made some new friends and spent hours on the radio after school. It was the following year that I traded in the AM for a SSB rig, more on that next time.
Cheers,
Mick 361