This turned out to be quite quick (about 4 hours) and easy. I used VK4LHD's construction method. The materials were under $50.

The aluminum tubing is cut into 6 lengths : 2 x 1200mm for the base reflectors and 4x 520mm for the top elements. These are inserted into a 40mm diameter/1000mm long pvc pipe with 1 hole drilled at 520mm  from the top and the second hole 550mm from the top and at 90 degrees to the first hole. 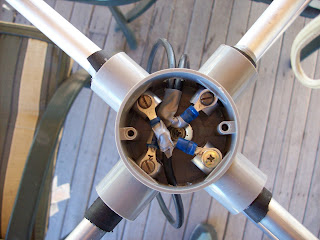 Thats basically all there is to it. On the first pass of  NOAA 19 today, the image quality is vastly superior to any antenna i have tried before. Some more fine tuning and i should have some decent images. Here are some NOAA 18's after a bit of tinkering with WXtoIMG: 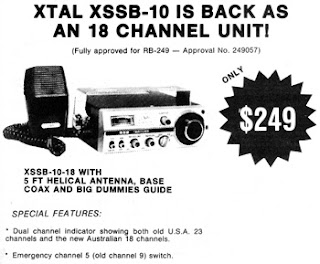 The following year, 1979, was an exciting year for me. It started off with a few of us starting a cb radio club, and quickly grew to include most of us school mates and other teenagers from the area. We had meetings and organized get togethers, and almost nightly nets. A few years later it disbanded, as we all went seperate ways.
I purchased my first SSB rig later that year, a second hand but not very old Xtal XSSB 10-18. It was the RB-249 Australian approved 18 channel version of the 23 channel from the USA. While it didn't have a very good reputation at the time, and had very basic features, I found it a great little radio which performed excellently. Like the Fanon Fanfare182, the Xtal had the Aussie 18 with the corresponding US channels on the dial. It cost me $70, which was less than half of the new price in '79. The radio was probably the most compact SSB mobile of it's time, which I would say led to it's poor reputation, bigger obviously meant better back then. I also upgraded my antenna to a 5/8 ground plane from Tandy, and added a cheap desk microphone, a Vicom VM2. This new set up opened a new world and I made many DX contacts on SSB, and started collecting QSL cards. We had our own club printed cards to send, and a club PO Box. Sad to say, all my old cards were lost over the years. It served me very well the Xtal and never had a problem with it.
Cheers,
Mick 361. 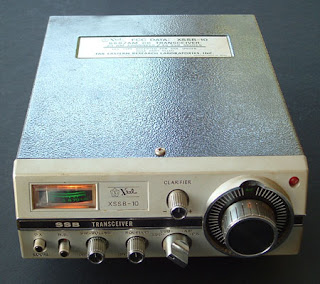 Another rainy day project! Recently, i have been making great use of my RTL Dongle with SDR# to cover the airband as well as local signals in the 118-170 MHz range. The problem: my Discone did not do a good enough job. The solution: a quick build dipole.
In keeping with spirit of this blog, i sourced the parts from an old tv antenna and a bit of pvc pipe i had left over from the multiband longwire build. The 2 elements were cut to 58cm and fed into the pipe...and thats it! Easy peasy.


The results are a fantastic improvement on the Discone. I'm picking up airports and aircraft  from all over the state as well as interstate. The signals are clear, particularly from the aircraft. I'm happy now that between both SDRs, i have HF and VHF Aero covered. As a test, i followed a Qantas international flight (listening on VHF) from take off, then on HF as it left our shores and ultimately tracked it using HFDL as it flew out over the Pacific.No shortage of interesting things to listen to once the cold days and nights really set in.Build time: approximately one hour.
Posted by Phil at 15:44 3 comments: